Morning coffee- Spring edition: Venus and the crescent Moon, a comet and a pair of galaxies 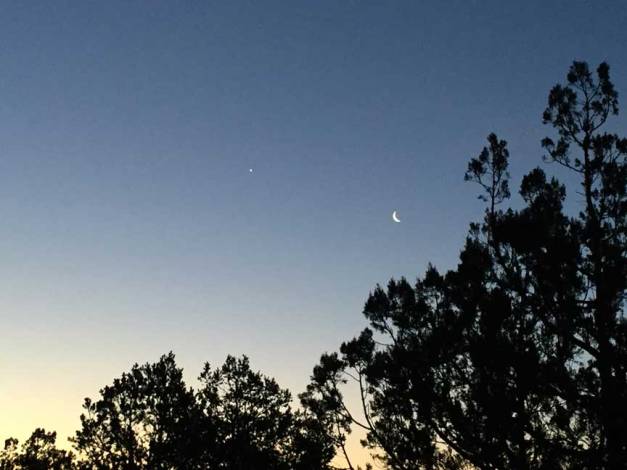 This kind of stuff never gets old! A crisp Sunday morning, a cup of hot coffee, and a glorious sunrise with our friends Venus, who is a morning planet now after passing through inferior conjunction,, and of course a waning crescent moon.

Spring hasn’t quite sprung yet up here on the Hill. This morning the temp didn’t quite break 30 degrees. Strange patch of high humidity came through last night and when I checked the scope after last night’s session there was frost on it! Had to throw out about 75% of the images as a result. But, we did get one hour’s worth of new data on a new imaging project, the galaxy pair M81 and M82. I have never actually imaged these together before. Looking forward to the finished result! Then to top it off I found one of this month’s binocular bright comets, PanSTARRS, making its way through Aquarius now. I caught a glimpse of it about an hour and half before sunrise. Not enough time to do a full imaging sequence but enough to see a tail! Comet Lovejoy, supposedly more impressive is just too low now for me to get a good look at it. We’ll have to revisit these next month perhaps! 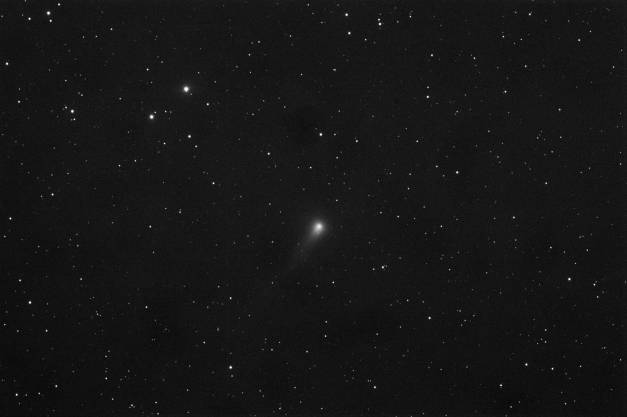 Comet PanSTARRS (C/2015 ER61) just passed closest to Earth on April 19 at 109.5 million miles. It should continue to brighten up until May 10 when it reaches perihelion, closest to the Sun. This is just a 1 minute single frame uncalibrated luminance image taken with the 5″ refractor 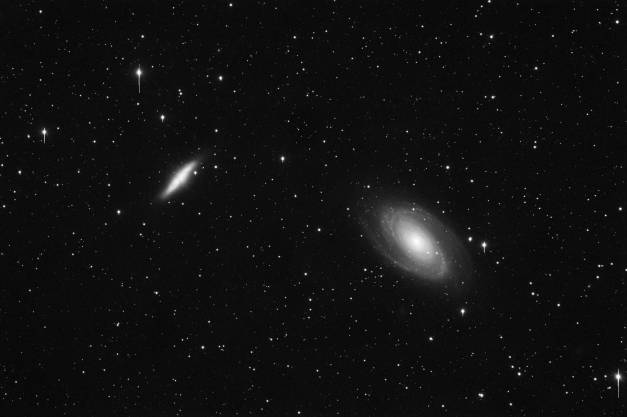 New project! The galaxy pair M81, M82 are part of the “M81 galaxy group”. There is a third galaxy, NGC 3077 which is interacting with the other 2 gravitationally but not in this field. The interactions have stripped away hydrogen gases from all 3 forming intergalactic filamentary structures called the Integrated Flux Nebula, I hope will be revealed in the final image. This is a single raw uncalibrated 6 minute luminance image taken with the 5″ refractor. Note the vertical lines through some of the stars. This ccd is very sensitive and what is called non-antiblooming, meaning that for these stars the charge in these pixels have exceeded the saturation level and then start to fill adjacent pixels. The sensor is designed to allow for vertical shifting of charge but not horizontal. So yes, this is kind of an “accepted inconvenience” , which has to be processed out of the image at some point, in exchange for higher quantum efficiency and data preservation but perhaps a topic for another day!

After a fairly long course of gremlin battling (since October of last year!) I finally completed a full automated imaging project. Note this is “automated” but not “remote”, meaning I still have to go up there to turn everything on but once that’s done I can go back to the base house to do everything else. That’s the first step. Once we can do that fairly reliably, the next step is total remote operation off site. A lot to do before that!

Still trying to figure out guiding issues with CCD autopilot but we did get this done. It was a relatively short project, just over 7 hours and only 1 channel, Hydrogen alpha ,but a very interesting area that I had not visited before! SH2 249 is an emission nebula visible in the constellation Gemini. Currently March through May/June is really galaxy season and our equipment is not particularly suitable for that…yet! So this was a good initial target. Stewart Sharpless (Hence the designation ‘SH’) back in 1959 published a catalog of HII regions. What is an HII region? Here is the explanation (from Wikipedia):”An H II region or HII region is a region of interstellar atomic hydrogen that is ionized.[1] (H is the chemical symbol for hydrogen, and “II” is the Roman numeral for 2. It is customary in astronomy to use the Roman numeral I for neutral atoms, II for singly-ionised—H II is H+ in other sciences—III for doubly-ionised, e.g. O III is O++, etc.[2] H II, or H+, consists of free protons.) It is typically a cloud of partially ionized gas in which star formation has recently taken place, with a size ranging from one to hundreds of light years, and density from a few to about a million particles per cubic cm. The short-lived blue stars created in these regions emit copious amounts of ultraviolet light that ionize the surrounding gas. H II regions—sometimes several hundred light-years across—are often associated with giant molecular clouds.” Probably the most famous of these is the Orion nebula, but there are many many others! This is one I discovered, never imaged before, designated SH2 249. The object to the upper right has been called by astronomers the “Jellyfish nebula” for obvious reasons. Equipment used is shown here. Right now we have a Tak 130 NFB refractor, SBIG STXL 6303 camera with self guiding filter wheel. 29 exposures with a hydrogen alpha filter, each 15 minutes long. 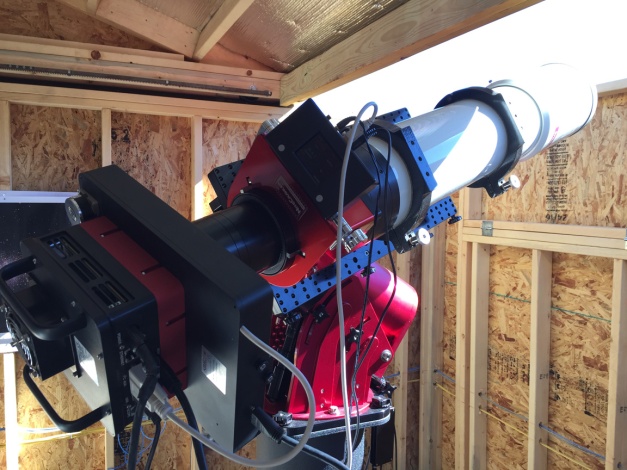 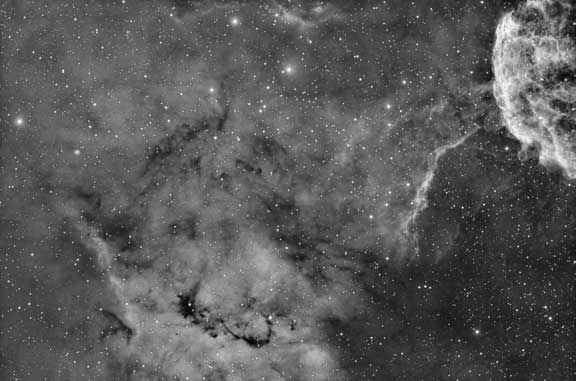