Tightly bound spherical collections of stars known as “globular clusters” exist in most galaxies, orbiting around their cores. Our own Milky Way galaxy has about 150 or so. Most astronomy enthusiasts who live in the Northern Hemisphere are quite familiar with the “Great Hercules Cluster” M13 located in the constellation Hercules. An impressive sight in any telescope, the Hercules cluster has a few hundred thousand stars and measures 145 light years in diameter. It is faintly visible to the naked eye. M13 is by far the largest globular cluster visible from the Northern Hemisphere, but it isn’t the largest in our galaxy. That title belongs to Omega Centauri, or NGC 5139, in the constellation Centaurus. Unfortunately Omega Centauri is visible “mainly” from the Southern Hemisphere. The reason I say “mainly” is that last year I accidentally came across it while casually sweeping the southern horizon with a pair of binoculars from the deck of the house up at Orion’s Belt Observatory! It turns out we actually do have a small 2 hour window of visibility from this location. Omega Centauri is quite visible with the naked eye from a dark site and looks to be about the same diameter as the full Moon! By contrast to M13, Omega has several million stars packed so densely they are on average only 0.1 light years apart from each other! At 180 light year diameter it is only slightly larger than M13 but has many times the number of stars.

While working on the “pier 2” equipment, I decided to take a couple of test images of the cluster during the brief window of visibility just to see what I could see! Of course this is not an easy target from this location, with a maximum elevation of 7-8 degrees above the horizon! The observatory has panels on the south wall that can be dropped down to access the horizon. This is exactly the situation they were designed for! I pointed the Tak 180 to Omega and tried a few 3 minute exposures. The results were much better than anticipated. The dark skies certainly help. On the screen was the glorious Omega Centauri cluster! The image I thought was pretty clean and stars well resolved for just a single exposure. The Tak 180 is a known bear to collimate and I did the best I could just for this test but it will need some work..a subject for a future post. Anyway I felt this was going to be a definite legitimate target in the future based on this preliminary test!

Screen shot from the “Stellarium” program showing the location currently of Omega Centauri (broken square icon due South) at its maximum elevation during transit of a wopping 7 degrees above the horizon! Some of the brighter stars in the constellation Centaurus are seen to the left 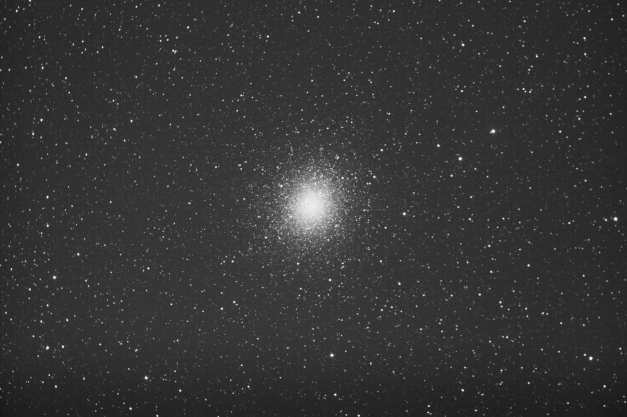 NGC 5139 or Omega Centauri is the largest globular cluster in our galaxy! This is a single raw image taken from Orion’s Belt Remote Observatory using a Tak 180ED on a Paramount MX+. 3 minute exposure. Canon 60Da camera. I did a quick collimation with CCD inspector and it’s actually pretty decent but if you look to the left side of the image the stars are a little elongated. I was quite thrilled with this quick test and can certainly add the cluster to the list of obtainable targets from this location!

Perhaps like Edmund Halley in 1677, I “rediscovered” the largest globular cluster in our galaxy, totally randomly! It’s about 4:30 am. A frequent ritual up here in Mayhill NM, at the astronomer’s living quarters, base of Mintaka Hill, I go outdoors before sunrise to do some binocular viewing from the deck with my 16 x 70’s. Take advantage of the dark skies! So I’m sweeping around the sky and moving along the horizon to the south…Boom! What the heck is that? Looks like M13 on steroids! M13 known as the largest globular cluster seen from the Northern Hemisphere contains some 300,000 stars. Omega Centauri has 10,000,000!! I see that I am looking in Centaurus and I’m about 10 degrees above the horizon. Yep. That’s definitely the legendary Omega Centauri! Spotted for the first time in my life! A bunch of people in our neighborhood here have told me you can see it but it’s not easy. For most folks in the northern hemisphere it’s not visible due to sky glow in most areas and the fact it is skirting the horizon. Really a southern hemisphere target. I assumed you had to be higher up on the mountain here to catch it. I look with the naked eye to the South and definitely it’s blaring right at you at only magnitude 3 and change! A much easier target than I could have imagined. I am sure from the observatory it can be imaged especially since I am facing due South and have the drop down wall. Fortuitous planning on my part! But, before I image it I’m going to look through the refractor tomorrow. Can’t wait!

Screen shot from Stellarium looking due South. Omega Centauri is the “star” indicated by the white arrow. The group of brighter stars to immediate left make up the constellation Centaurus. Corvus is to the slight lower right of Spica. Scorpius is on the far left where Mars resides currently.