Eyes over the teapot!

As seen from the northern hemisphere, the constellation’s brighter stars form an easily recognizable asterism known as ‘the Teapot’. The stars δ Sgr (Kaus Media), ε Sgr (Kaus Australis), ζ Sgr (Ascella), and φ Sgr form the body of the pot; λ Sgr (Kaus Borealis) is the point of the lid; γ2 Sgr (Alnasl) is the tip of the spout; and σ Sgr (Nunki) and τ Sgr the handle. These same stars originally formed the bow and arrow of Sagittarius. (From Wikipedia, “Sagittarius constellation”)

In today’s “morning coffee” addition up at the observatory we turn our attention back to  early morning visual and binocular viewing! It’s 5:30 AM MDT. Spring has sprung and with it some of our old Milky Way friends in the South: the bright star clouds toward our galaxy’s center, the Lagoon nebula, Trifid, M22 globular cluster, M11 the Wild Duck cluster and others. However there was quite an unexpected surprise just above the constellation Sagittarius. 2 very bright objects, one red and one yellow nearly a fist width apart almost like 2 bright eyes! Yes, eyes over the teapot ,which is a known asterism for the constellation Sagittarius. The yellow object is Saturn. However the bright red object surprised me. This year, in fact by the end of this July, Mars will reach opposition and be nearly 2 times brighter than Jupiter! That hasn’t happened since 2003, when Mars was its closest to Earth in 60,000 years! Usually Mars is an inconspicuous rust colored dot lost amongst the stars. Not this year! It’s already making quite a show. Don’t miss it! 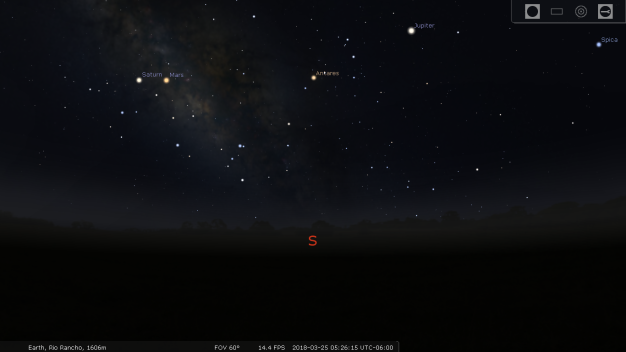 2 “eyes above the teapot” in early morning. Saturn is to the left and Mars right. Mars actually appears in the same binocular field as the Trifid nebula and the Lagoon nebula